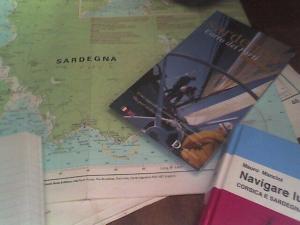 Here are some navigation insights from my 1 week bareboat charter on the southern coast of Sardinia leaving from Cagliari.  More detail can be found in my sailing log.

Weather– It was tricky getting an accurate weather forecast at Punta Menga as it is right in the middle of 3 forecast zones:  Sardinian Sea, Sardinian Channel and the SW Tyranean Sea.  Turned out none of the forecasts were accurate for this area.

Passages –  Passages are pretty straight forward with the only care that needs to be taken is in the San Pietro channel, there are sand bars at 2.5m.  A channel is properly marked.

Anchorages – All anchorages had excellent holding in sand though many were open to sea lane traffic so they experienced bounce or roll in the evenings.  Here are some notes for particular anchorages:

Boat Review– This was the first time we sailed a Delphia, ours was a 37 footer probably built in 2007.  Here are our thoughts about chartering this Polish build boat.

Other Area Insights: Before Departing  Provisions/Living Aboard  Sailing Stuff